The Holden Beach Beautification Club held the end of year Social on May 11, at The View Restaurant.  The social is the grand finale for a year of plantings, projects, landscaping and festivals. It is also the time new officers are inducted for the coming year and new chairmen of committees are announced.

Special guests were Mayor Alan Holden, Town Manager David Hewett, Town Clerk Heather Finnell and Parks and Rec Director Christy Ferguson.  The Town is a big supporter of HBBC during the year and we are so grateful for their help.

President Gayle Todd welcomed everyone and explained to those attending that the front of the program depicting our theme for the year, “To Plant a Garden is to Believe in Tomorrow”, could be colored and entered into a contest for best “adult coloring” which would be judged at the end of the meeting. Members and guests colored throughout the meeting and social. FUN!  After a short speech by Gayle about the successful year for HBBC, Diana Hadesty blessed the food.

Awards were announced. Garden Club of North Carolina awarded HBBC first place in the state for landscaping design for the Padgett Garden Extension.  Sharon Butler gave out new members sponsor gifts, Gayle awarded the Trowel Award to Carolyn Metrakos and the Club Member of the Year Award, voted on by all the members, went to Donna Blume.

Gayle thanked the officers and committee chairs with a gift from her.  The Club presented Gayle with an engraved garden stone for her work as President. 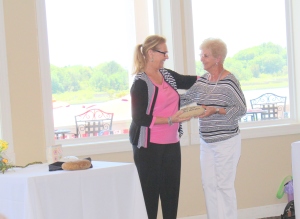